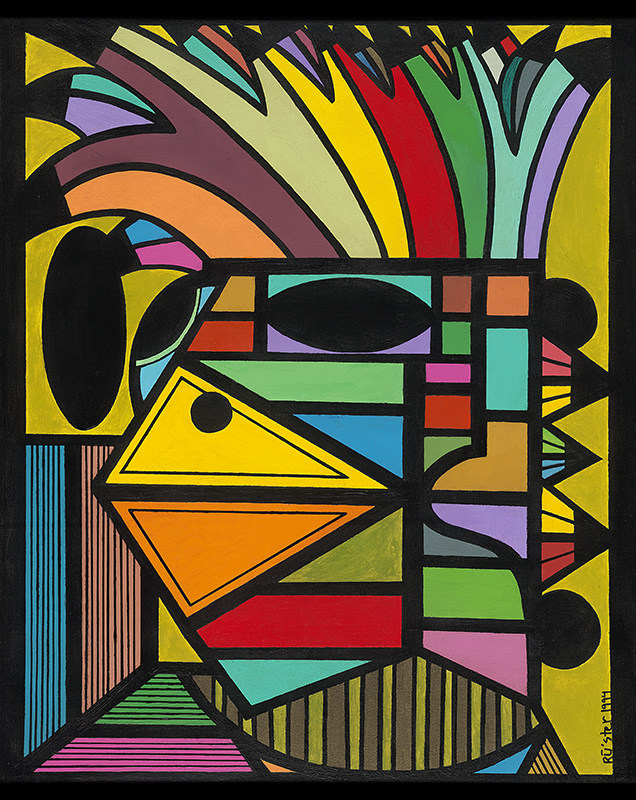 Ruchell Alexander was a year old when he and his family settled in Northern New Mexico. He moved here directly from southern Mexico where he had lived most of his life thus far. Soon after arriving, Ruchell and his family were among the dozen or so original members of the Magic Tortoise Commune which was established in 1973 on Lama Mountain, between San Cristobal and Questa.

It was his good fortune, artistically speaking, that another of the original members of Magic Tortoise was an erstwhile New Yorker named Bill Gersh who in 10 years would emerge as a renowned Southwest painter and sculptor.

It is undeniable that from his earliest age Ru was inspired and stimulated by Bill Gersh to become an artist. As Ru grew up in the "one big family" ambience of the commune, he spent more and more time in Bill's studio, chatting, observing, asking and answering questions and much of the time making magic-marker drawings while Bill was painting.

And as Ru matured--all the while living, jiving, and eating and working, in his fashion, side-by-side with his pal Bill it was inevitable that Bill became his mentor--although the influence of Bill's subject matter and technique is hard to see in Ru's early work. Only in the last two or three years has Ru been integrating Bill's powerful influence into his own art.

Eventually the near-immediacy that acrylic paints allow convinced Ruchell that he could mature his art without totally breaking with it's "raison-d'etre" of spontaneity.

The result is Ruchell Alexander's art of today: larger, multi-figured canvasses with dramatic, autobiographical subjects including indications of the centrality of Bill Gersh -- both personally and artistically in his formation as both a man and artist.